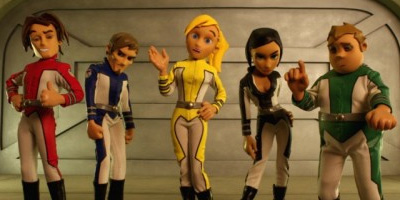 Drafted from the solar system's best and brightest young people, Titan Force Five once defended the capital of Saturn's moon Titan using the heavily armed Mecha Titan Maximum. However, the team was disbanded due to budget cuts after a series of escalating incidents. Two years later, after the team members have long separated and gone to ground in civilian jobs (one of them, Spud, has even died in an accident), their former teammate Gibbs returns as a villain who wants to conquer the Solar System with an army of monsters. Now the three remaining Titan Force Five members have to reform the team to stop him. Along for the ride are Palmer's younger brother Willie (a nerdy mechanical genius) and Leon (their silent monkey janitor), who take on the former roles of Gibbs and Spud, respectively. (source : wikipédia)